A facelift for the skyscraper foyer

The Skyper building complex in Frankfurt am Main boasts a very special architecture. The three-part complex – consisting of the 153.8-metre Skyper high-rise with 39 floors, the neoclassical Skyper Villa from 1915 and the Skyper Carrée – offers a total of 53,900 m2 of office space for numerous companies and banks. When the existing single access entry systems were dismantled in the summer of 2020 as part of renovation work on the foyer, the owner opted for a new, modern solution that would blend in perfectly with the architecture of the skyscraper. Every day, large numbers of people go the foyer to get to their workplace. Numerous visitors also pass through this area. This called for a solution combining functionality, safety and an appealing design. 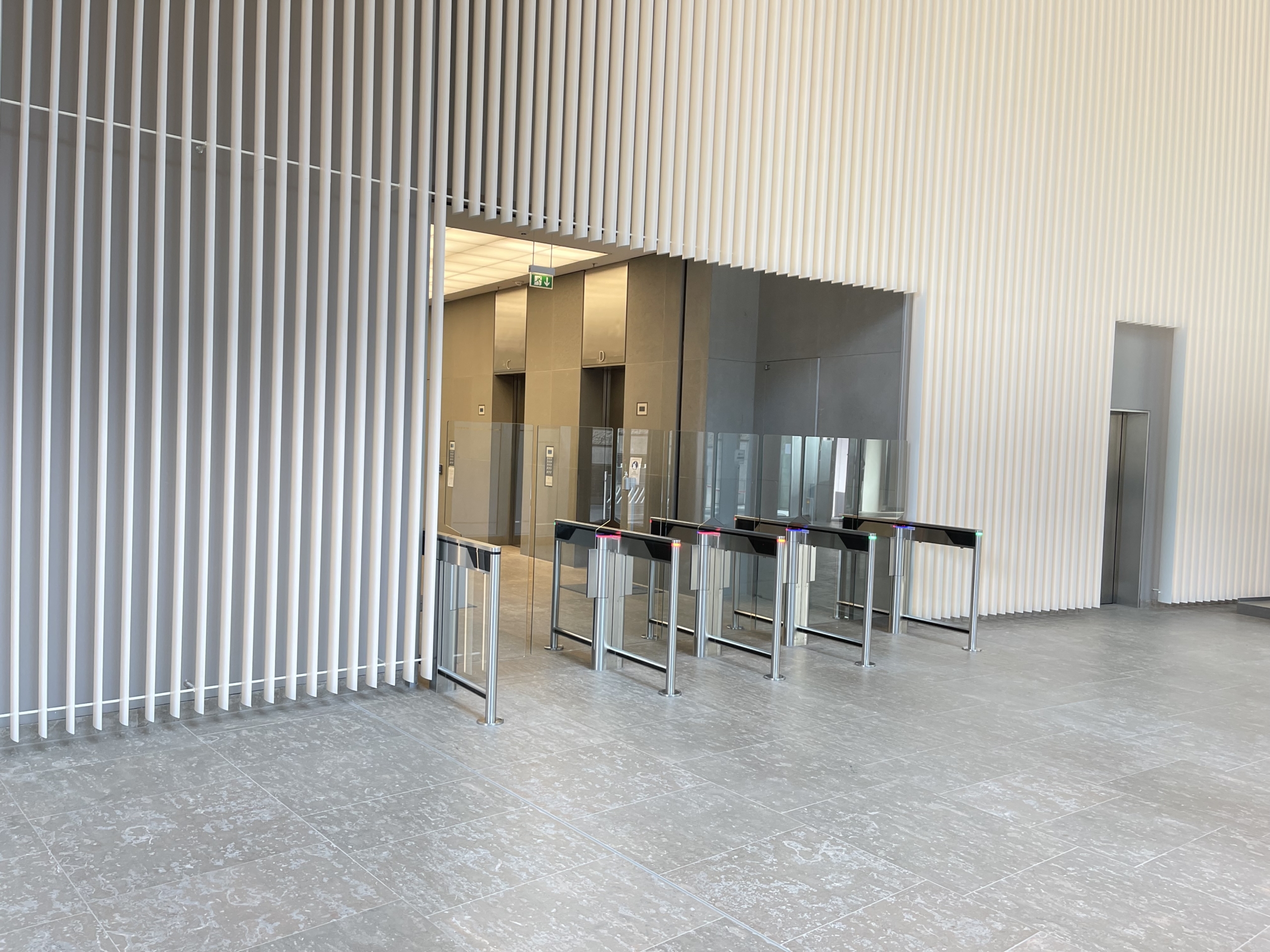 As deputy property manager and technical manager, Norman Lambusch from WISAG Gebäudetechnik Hessen GmbH & Co. KG also heads up special projects around the Skyper complex. “I’ve been working in these buildings since 2005 and know them inside out. So I also knew that the turnstiles from Automatic Systems used up to then had always worked very reliably and trouble-free.

However, since the existing systems had suffered greatly during the construction work, I already suspected that some repair work would definitely be necessary for putting them back into operation. In consultation with the operator and based on our positive experience, we therefore approached the company again to request general overhaul of the existing system as well as a new, more modern alternative.” After discussions with the architect carrying out the work, the client decided to install a new SlimLane premium sensor barrier from Automatic Systems due to its attractive appearance. An individual solution was then offered that exactly met the customer’s requirements and fitted perfectly into the transition from the foyer to the lift area. A total of four speedgates with an overall height of 1700 mm were installed. The double-leaf doors made of safety glass open in less than a second after successful authentication. 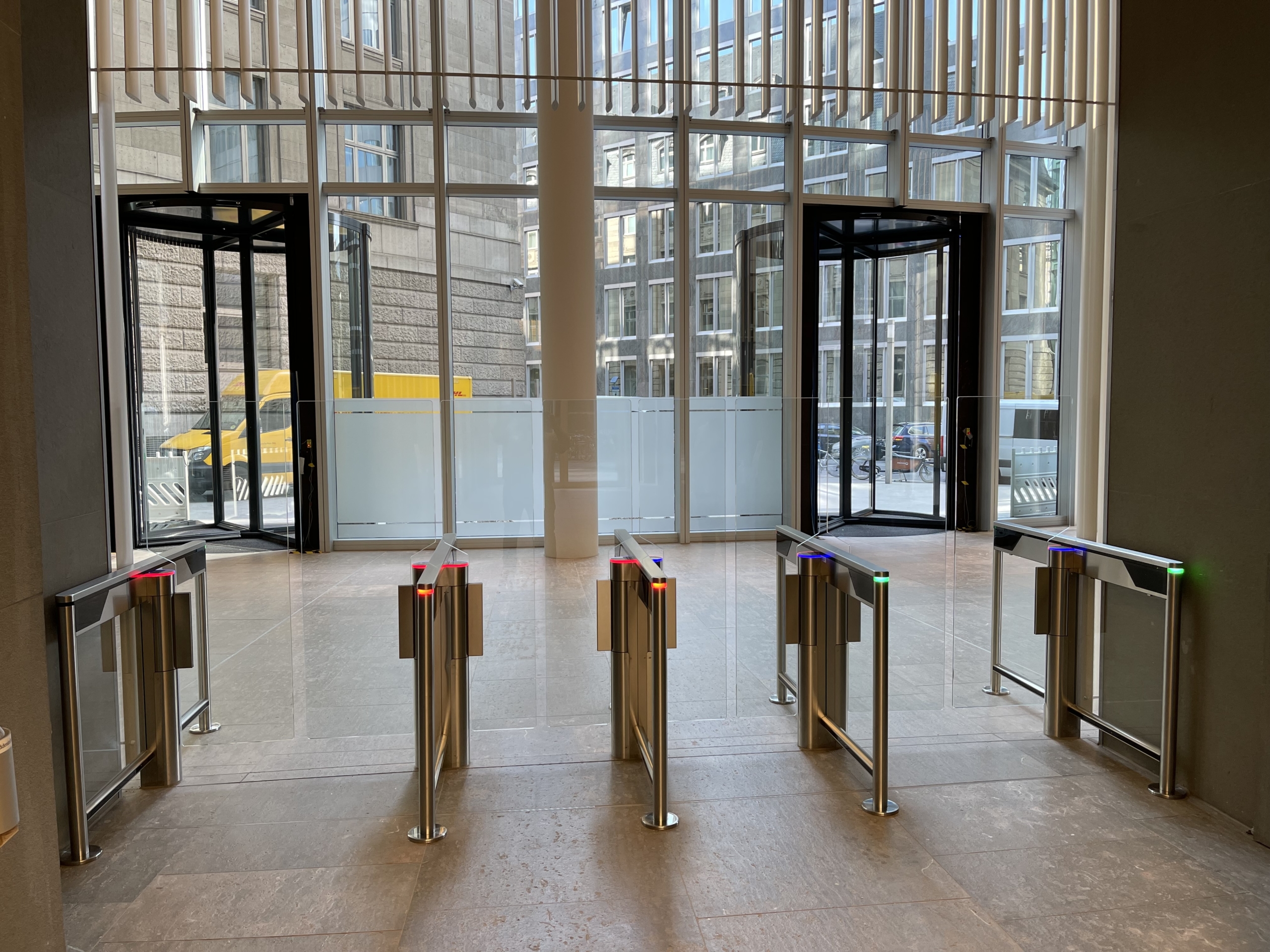 The passage widths were selected at the customer’s request so that they are partly barrier-free and also harmoniously round off the overall appearance of the entrance area. SlimLane not only offers excellent access control in both directions. It is also convincing with a transparent and unobtrusive design while at the same time providing for maximum throughput of people. The two middle sensor barriers have a passage width of 660 mm, with the two outer ones even opening to 1020 mm. The entire system is controlled via twelve card readers that have been inconspicuously and ergonomically integrated into the housing. Once the card is successfully swiped, the glass doors open automatically and completely contact-free. The card readers at the two barrier-free passageways only partially open for a passage width of around 660 mm in normal operation, but allow passage over the full passage width if required. Thanks to the exclusive DIRAS detection system from Automatic Systems and the associated high-density matrix of infra-red sensors, the user’s movements in the passageway are detected immediately, with any fraudulent attempts detected with a high degree of precision. In terms of optimal user-friendliness, the system also has well-lit pictograms, accompanied by intuitive use and better throughput figures. All in all, this allows controlled access to the security areas in the Skyper complex complying with current security standards. The system also integrates remote control of the passageways: This means that the gatekeeper can control the access manually with the help of the Automatic System Smart Touch Panels. SlimLane is also fully equipped to deal with emergencies. The lanes open automatically in the direction of escape via the fire alarm system so that all persons can leave the building quickly and safely. In the event of a power failure, the doors can easily be opened by hand. 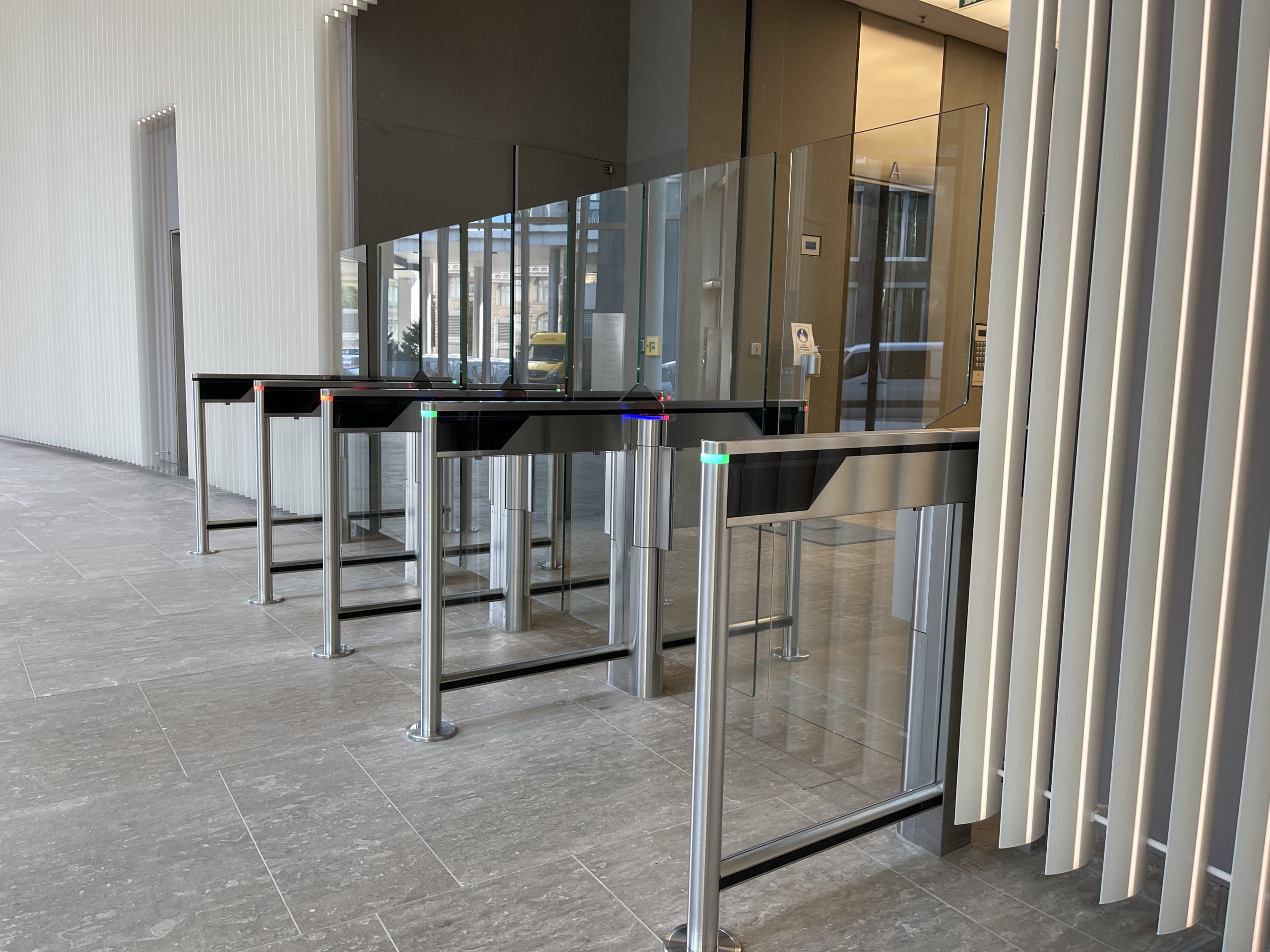 “During installation, the technicians were faced with special challenges,” Norman Lambusch recalls and adds: “Cable routes and heating pipes ran exactly under the planned installation location of the entry systems, which meant that the SlimLane housings could not be anchored as planned.” However, Norman Lambusch and the staff of Automatic Systems worked out a solution together that made it possible to securely anchor the system with the help of angle brackets for the foundation rails. This not only meant that the SlimLane housings could be fixed in place; the cable routes and heating lines could also remain untouched. All of the work on this special solution was completed on time, meaning that there was nothing to stand in the way of the pre-planned commissioning. “The installation went smoothly all around. The inventiveness and flexibility of the Automatic Systems team impressed everyone involved. The quick reactions and close contact also contributed to the smooth project roll-out,” recalls Norman Lambusch and adds that the feedback from the tenants and users was also positive in every way. The systems not only score highly thanks to their unobtrusive appearance, but also due to their high-quality workmanship and sophisticated technology. With regard to maintenance, a number of WISAG employees have been trained by Automatic Systems so that minor maintenance work can be carried out in-house. The regular inspections are then carried out by the experts themselves to ensure that the SlimLane systems are always in perfect working order.